Did Your Printer Receive A Message From A Hacker? 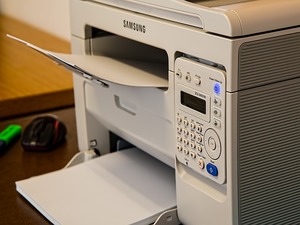 Of course, in the process of doing so, he terrified and confused a lot of people.
Having researched a printer vulnerability, he wanted to help get the word out and have a little fun at the same time. So, he wrote a script that sent commands to more than 150,000 different printers scattered all around the world.

When the script executed, it exploited a port vulnerability bug and started printing out.
In this case, he sent commands to print out a page of ASCII art and some information about the vulnerability, even thoughtfully leaving his contact information in case people had questions.

Reactions to his prank ran the gamut from panic to amusement, and many people began sharing photos of the printed output on Facebook, Instagram and other social media sites. Needless to say, his inbox has been overflowing with messages, but the vast majority of them are to thank him for pointing out the problem.

Amazingly, the exploit he utilized isn’t new, but few people think to update their firmware regularly, which explains why so many printers were affected.

Whether you got one of these mystery messages, this incident underscores the point beautifully that hackers are always looking for a new exploit. A new way “in,” and it’s just a matter of time before they find it.

In this case, the exploit was pointed out by one of the good guys in the internet’s underbelly, but next time you might not be so lucky.

The right answer here is to thank him, and disable port 9100 (which is where the vulnerability lies). Oh, and make sure your router’s admin password is set to something besides the default.