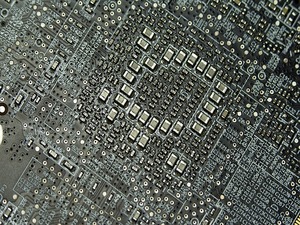 Samsung has provided the latest piece of the puzzle, in the form of a memory chip called PM971-NVMe. While the name might not be the catchiest in the industry, its implications are staggering. The company has managed to fit a whopping 512 Gigs of storage capacity into a chip the size of a postage stamp. Unlike other, conventional memory devices, this chip doesn’t rely on a SATA connection, but instead, can be installed directly onto the motherboard, which dramatically increases speed. According to company specs, this little beauty can download 5 Gigs worth of data in about six seconds, with reading speeds of 1.5GBps and writing speeds clocking in at an impressive 900MBps. Even better, it weighs less than half an ounce.

One of the biggest shortcomings of handheld devices, and a limitation we’ve suffered with since the very first ones began appearing on the market is the fact that onboard storage has always been at a premium. High bandwidth, low latency wireless connections gave rise to the cloud, which helped to offset this limitation, but no matter how you slice it, accessing data from the cloud will never, and can never be as fast or as efficient as accessing it from the device itself.

From the look of things, we’re about to see the end of that particular limitation. The only real drawback? Price. Currently, these chips cost in excess of a thousand dollars. The hope, of course, is as mass production ramps up, that too, will change, but at present, when equipment starts shipping sporting the new memory chips, you’ll only find them in high-end gear. If previous trends keep up, prices will drop and this technology will find its way into the masses and into our devices.