Should You Choose Ultrawide Or Multiple Monitors To Boost Productivity? 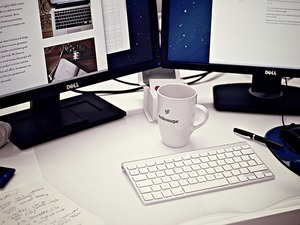 The first thing to realize is that more, or larger monitors doesn’t necessarily mean more screen real estate, which is what you’re really after if you’re looking to take your productivity to the next level. Screen real estate is a function of resolution, but there’s a tradeoff: The more you increase your resolution, the smaller the text on the screen becomes, so there are limits to the resolution you can use.

It’s true that ultrawide monitors are more expensive, but that’s not really a completely fair comparison, because if you have a multiple-monitor setup, you’ll need extra hardware (graphics cards, screen mounts, and cables) to run them, and when you factor those added costs in, it’s pretty much a wash, with multiple monitors being marginally, but not notably cheaper. On the other hand, if you’re running a multiple monitor workstation, you’re going to tie up almost all of your PC’s slots, which will limit future expansion options, while an ultrawide preserves those slots.

The bottom line is that both are good, but if you invest in an ultrawide monitor that’s 32” or larger, it winds up coming out ahead. At that size or bigger, you can set your resolution to make it the equal of two, three, or even four monitors, dramatically increasing your screen real estate and allowing you to multitask to your heart’s content. Of course, it’s useful in your downtime too, because games and movies look amazing on ultrawide monitors. That, by itself isn’t reason enough to make the switch, but it is worth mentioning.

Most people tend to stick with multiple monitor setups, because that’s what they know and are used to, but ultrawides are the future of desktop computing, and with a large enough monitor, can be superior to the multi-monitor setup.

As for productivity there is no clear winner. Either option will provide you or your employees with increased productivity. It really comes down to desk configuration and costs. Figure out what makes sense for your particular situation and make a decision based on those factors.